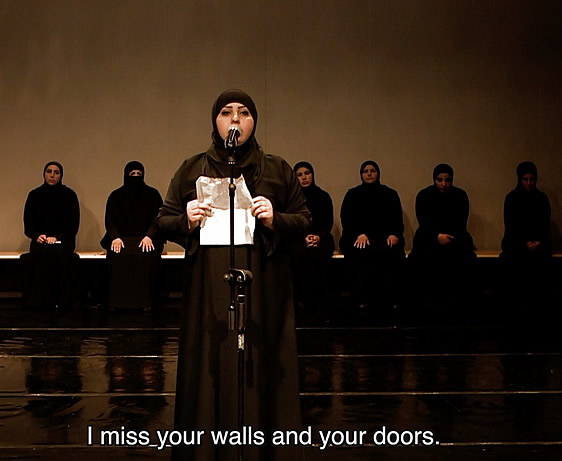 There’s an extraordinarily moving scene in Yasmin Fedda’s recent documentary, Queens of Syria. Framed in medium close up with low-key lighting, a Syrian woman –  living in exile in Jordan – recites a ‘love letter’ to her lost home. The context for her performance is The Trojan Woman – an interactive and multimedia theater project based on the classic Euripides’ tragedy. Queens of Syria follows a group of Syrian women who are refugees, as they prepare to perform the play, for the first time, to a live audience.

The Trojan Woman boldly brings into parallel space the uprooting and bereavement suffered by the fictional queens of Ancient Greece with the more modern suffering of refugee women displaced from Syria because of the war. The classic play is used as a springboard for a re-telling of the Syrian women’s experiences of violent upheaval and loss.

In this particular scene, Fatima takes her turn in front of the audience and camera.

I miss you too my precious. I miss your walls and your doors. I miss every corner you had. I miss your stairs and standing by the window. I miss kissing your walls, and lying on your tiles. Oh my dearest house, I wish I could go back to you…so that I can tell you what happened to me after I left you. You protected me and gave me dignity. I was like a tree then someone came and uprooted me.

It is heartbreaking and powerful.

It’s the way Fedda chooses to quietly observe the women and the project team with little sense of a director’s ego, which makes this film so special. With steady ease, Fedda captures so much more than the collaborative process driving the theatre rehearsals. We watch through astute framing and alongside Fedda’s decisive gaze, a process of slow, uneven transformation and personal revelation over a 7-week period.

This is a rehearsal space peppered by rich overlapping interactions: between the refugee women, or between them and dramaturge, Omar, and his colleague, Nanda. We are pulled through a medley of complex human interactions. Euripides’ play is the therapeutic ground through which the women are eased into partial recovery; where they begin (tentatively) to give voice to traumatic memories – recalling the circumstances forcing them to flee and become ‘refugees’ in Jordan.

Queens of Syria is so much more than a chronicle of a theatre experiment; it is, in its own right an impressive artistic intervention. Fedda takes her cue from the small, at times uncomfortable re-enactments in the rehearsal space and mostly from what is left ‘unsaid’ – what cannot be expressed yet is visceral. The stories of the women’s exodus from Syria are navigated through the prism of the classical text, constantly mulled over and probed by the wonderfully humane yet firm, Omar. And Fedda’s camera is always ‘just close enough’ to capture these moments. Her technique is intimate but not intrusive.

At times Fedda strays from the intensity of the rehearsal space into some of the women’s homes, subtly framing domestic lives with children and spouses allowing us see the women in a different light. Each portrayal is evenly balanced exploring issues of gender and class with tensions between spouses registered. This is nuanced never stereotypical. The women are hugely ambitious for this play as they are for their own futures. The play is a testing ground onto which they project and map dreams and find a language to craft their own story. As Suad says ‘ I always dreamed of acting when I was young. I can’t believe my dream has come true. But only because of what is happening to my country. This isn’t how I wanted it to happen.’

Fedda chooses to end the film with a carefully constructed sequence opening the story of this experimental project and the refugee women who perform it, outward and open-ended.  Leaving us to wonder ‘what will become of these women’? The camera frames the interface between performers and audience at the moment where the women collectively bow and we hear the final applause. Immediately Fedda re-directs us back to the empty rehearsal space, with each shot conjuring a memory of the magic of the rehearsals. Perhaps alluding to what has actually been achieved in The Trojan Woman or what might transpire in the future in yet another project, with another group of women who happen to be refugees.

Fedda is a hugely confident storyteller and this is a truly exceptional film.

See more of her work here. Coming soon is a working paper based on a recent Learning Lab conversation with Fedda.