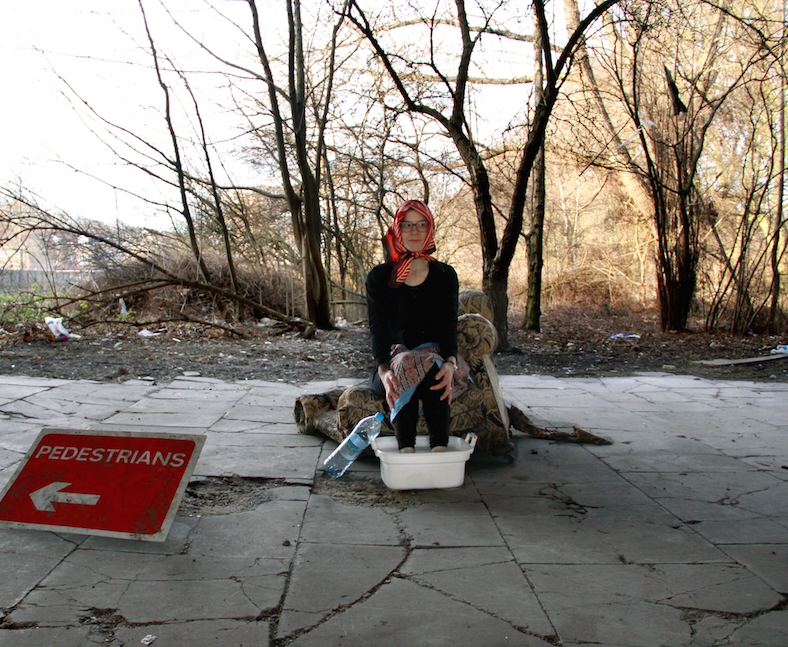 Join us for a Learning Lab focusing on the unique interdisciplinary methodologies and creative thinking behind the performance duo There There,  as they embark on audience development for a wider touring of their Arts Council England funded, Eastern Europeans for Dummies.

Part ‘performance taster’ by There There, part a ‘think and do’ roundtable, Learning Lab will bring together a mix of people, practices and sectors across the arts, advocacy, activism and academia to connect with and feed into the next stage of Eastern Europeans for Dummies at both research and implementation level.

‘Audience Development’ – merely a tokenistic part of the grant application process, with diversity boxes diligently (if not reluctantly) ticked by artists and/or venues – a formulaic requirement and condition of successfully getting a grant?

Or, is ‘audience development’ part and parcel of the necessary politics and conceptual thinking in the development of a creative production from the very get go?

How might audience development shape a project like Eastern Europeans for Dummies, resulting in notable inclusion of Eastern European and emerging immigrant communities as participating audiences?

How to utilise ‘audience development’ as a critical tool in the building of cross-sector collaboration and public engagement in the current debates about UK immigration?

Eastern Europeans for Dummies: [Revolves] around the ideas of immigrant identity…[blending] first hand facts about Eastern Europeans as a cohort with satirical facts of the immigration reality in the UK… [A] mash up of Eastern and Western European preconceptions alike; if you focus you can spot the failed multiculturalism in the distance.

There There are a 50% Romanian 50% Serbian performance company, conjured up in London by Dana Olarescu and Bojana Jankovic.

The company’s practice revolves around the topics that emerge at the intersection of personal experiences and big-picture policy and politics, including immigration, immigrant identity, national identity, exclusion, institutionalism and heritage. Audience development, focused on engagement with immigrant communities, is an essential part of their creative practice.

There There have created pieces for the Museum of London, Romanian Cultural Centre and Giving in to Gift, and performed around the UK including at SPILL National Platform, Experimentica and Rich Mix.

Bojana Jankovic graduated from BA Theatre Directing at the Faculty of Dramatic Arts in Belgrade, Serbia and MA Performance Making at Goldsmiths, University of London. She directed contemporary European plays (Ingrid Lausund), classics (Jean Racine) and worked as a dramaturg on new writing and collaborative projects (with Rachel Parish, Anna Furse and Athletes of the Heart and Jovana Papovic). Bojana is the Performance Co-Editor of Exeunt (UK) and wrote for Teatron (Belgrade) between 2005 and 2013. She is one of the initiators of Critical Interruptions, a long-term project on performance criticism and its relationship to performative practices.

Dana Olarescu studied Theatre Directing at the University of Dramatic Arts in Bucharest, Romania and then completed the MA in Performance Making at Goldsmiths, University of London. Focused on international and interdisciplinary collaboration, her work ranges from audio-guided installations, devised performances and children dance shows to gallery based solos. Dana’s work has been presented in Romania, England, Hungary, France, Germany and South Korea, where she was artist in residence at the Incheon Arts Platform. She performed in Graeme Miller’s A girl skipping and participated in a group showcase of guerrilla projects for the 54th edition of La Biennale di Venezia.

Counterpoints Arts’ Learning Lab ‘Eastern Europeans for Dummies’: Immigrant audience development work of There There runs in collaboration with the Platforma London Network.

For more on Eastern Europeans for Dummies and There There, see here: