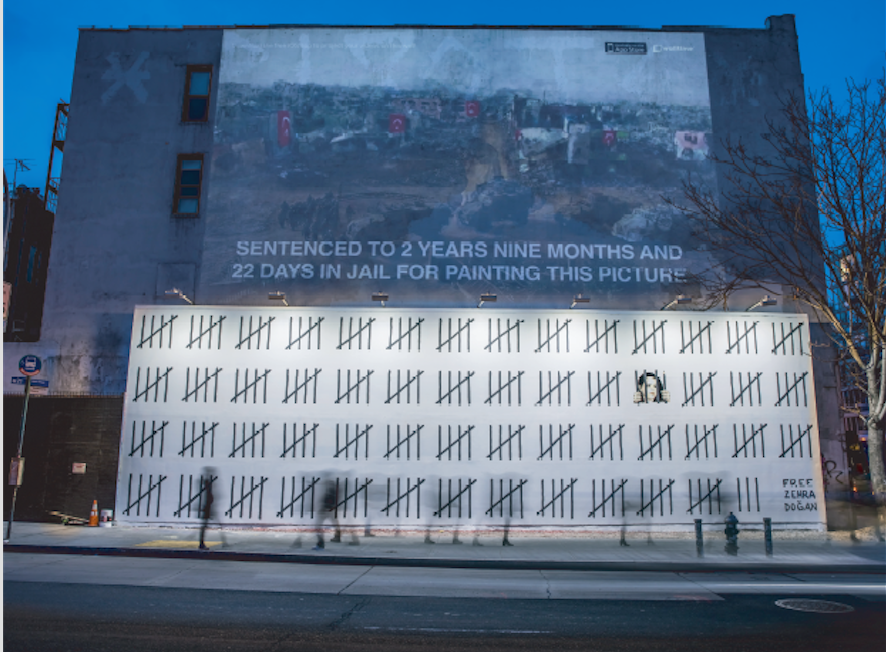 Join us for a conversation with artist, Zehra Doğan, in relation to her installation and recent publication, Li Dû Man (Left Behind).

The Li Dû Man installation and publication was co-produced for the Who Are We? 2019 programme by Counterpoints Arts with The Open University and Tate Exchange in association with English PEN, PEN International and Index on Censorship.

Li Dû Man: As a journalist covering the clashes in Kurdish cities in Turkey, 2015 – 2016, Doğan took the small objects she found in the debris, as testimony of a war no one was talking about. The Li Dû Man installation told the stories of those who fled or were killed, via what they left behind –  inviting the audience into a conversation and to participate in the crafting and performance of stories about place and displacement. Li Dû Man also housed an experimental, participatory press room where Zehra and her collaborator, writer and activist Ege Dundar, along with others wrote content and co-produced with visitors a newspaper for artists and activists imprisoned in Turkey.

The Li Dû Man publication reflects on the installation and the participatory letter-writing campaign together with Zehra’s journey as an artist, activist and journalist.  It offers insight into the current situation in Turkish prisons, where a number of writers, academics and writers – many of whom are Zehra’s friends and collaborators – still remain. It also provides a practical and participatory case study on ‘artists at risk’ with a first hand account and commentary from Zehra.

Zehra Doğan is the founding editor of the all-female news agency Jin News Agency (JİNHA), one of the many media outlets to have been closed in Turkey in the wake of the failed coup in 2016. Doğan was among the journalists to be arrested and imprisoned, serving almost three years in prison in Turkey on charges of ‘propagandising for a terrorist organisation’. She was finally released from prison in February 2019 and arrived in London in March 2019.  In April Doğan won the Index on Censorship Freedom of Expression Award for Arts and is currently Artist in Residence at English PEN.