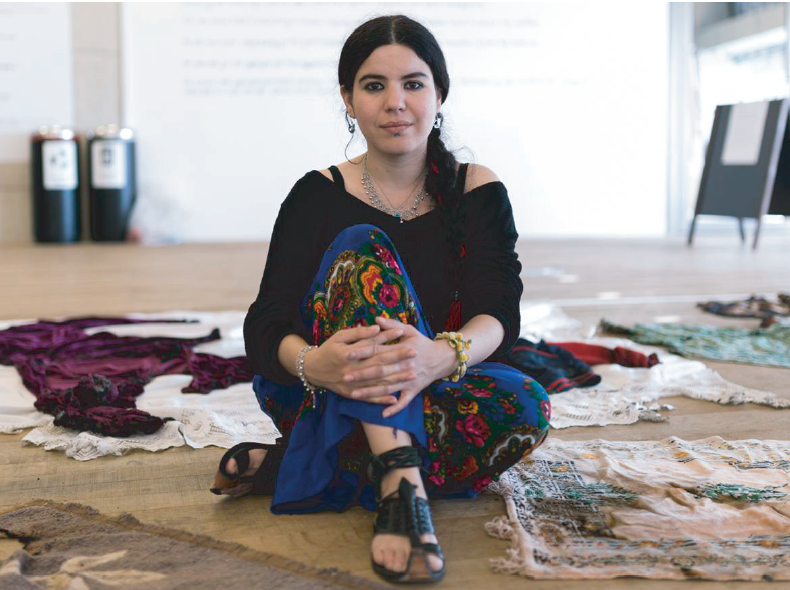 We invited participants to the Learning Lab on  Li Dû Man to respond to the quote below from Zehra. This is Jo Glanville’s contribution.

‘Every act of oppression creates its own resistance’ (Zehra Doğan)

This is a profound observation, like a law of physics: no act of oppression exists in a vacuum. It is not the end of the story, though that may be its intention. Oppression may seek to crush dissent, but in fact it engenders resistance. Zehra Doğan put this in another way in her letter exchange with Ai Weiwei, which you can read in the publication: ‘If persecution exists somewhere, always there is a dynamic against it. And art is the finest of those dynamics.’

This is a statement that sums up Zehra’s remarkable response to censorship and imprisonment in Turkey. It’s an expression of defiance and it’s also a call to action that can include all of us.

In her installation Li Dû Man, we can see Zehra living by this statement in everything she does. The remains of people’s lives, shattered by the conflict in Turkey, became a memorial of loss in her installation at Tate Exchange last year and also a visceral record of destruction. It’s what Áine O’Brien has called an ‘archiving impulse’ in her article with Dijana Rakovic and Jane Wells for the newspaper published as part of Li Dû Man – ‘to protect, preserve, perform and make present events, objects and the experiences of others’.

But the installation was also a springboard for action – campaigning for those in prison, drawing attention to the numbers of children imprisoned with their mothers, bearing witness to the numbers of journalists in prison. And it invited visitors to become participants in the call for action – writing letters to those in prison and voicing their own resistance. We know that these acts of solidarity matter. There’s a very moving description in Ege Dündar’s essay for the newspaper where Zehra describes receiving letters in prison, as part of the global campaign for her release: ‘[it] felt like a globally choreographed performance piece with envelopes showering into the cell, turning into colours, decorations and morale’.

Zehra’s ceaseless creativity is also testament that she lives by the statement: ‘every act of oppression creates its own resistance’. She will not cease to be creative, no matter the circumstances. As you’ll see from the newspaper, in prison, she used every object around her to make art: her own hair, her own blood, the food she ate. Everything, no matter the circumstances, has the potential to be art, a source of hope and resistance in the most extreme and apparently hopeless of circumstances.

It’s a response that demands enormous courage, which we may not all be capable of. But I think it’s a statement that can provide enormous hope in the darkest of times, not just in Turkey or other authoritarian regimes, but wherever there is need for political action – everywhere. As Ege wrote in his inspiring piece in the publication – this is about exchanging and engaging. It’s about collective action.

Jo Glanville is a writer, journalist and campaigner for human rights. She has written for the London Review of Books, the TLS, the Guardian, the Independent and the Bookseller, amongst other publications. She is the former director of English PEN, an award-winning editor of Index on Censorship and a news and documentary producer at the BBC.